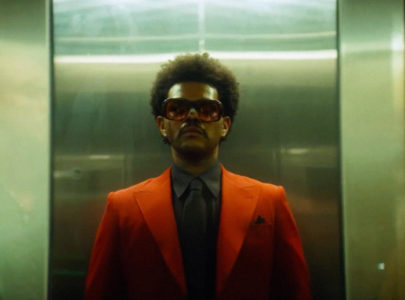 The Canadian pop-star returns in 2020 with After Hours and is Boom Radio’s artist of the month.

It’s been a quiet few years since the release of Starboy in 2016 but The Weeknd looks to be set  for a massive 2020.

Aside from the My Dear Melancholy EP which struggled to gain traction in the charts in the beginning of 2018, it’s been a long wait for fans.

The Weeknd is back to global dominance now, dropping two singles at the end of 2019.

Heartless, the hit single of his latest album After Hours, debuted at the top of the US Billboard charts, followed by Blinding Lights, which currently sits at the top of the Australian ARIA charts and at number four in the US.

After Hours is a slick reflection of the lane he’s carved out for himself over the past decade, the latest release continuing his album chart dominance despite only releasing two over a four year period.

The signature sound of the Weeknd has certainly evolved, from his 2011 debut mixtape House of Balloons, that merged indie samples from the likes of Beach House and Siouxsie and the Banshees with an atmospheric R&B sound characterised by Weeknd’s Michael Jackson-esque vocals, but with a darker twist.

His breakout hit came in 2015, I Can’t Feel My Face charmed the mainstream and topped the Billboard charts. He flirted with 80’s pop and electronic sounds on Starboy, before reaching his latest album, After Hours, which merges elements of synthpop with the dark RNB tones that kicked his career off in the first place.

The Weeknd’s latest work is his first studio album without any feature appearances, creating the moody Michael Jackson inspired tracks he’s known for.

After Hours saw the recruitment of producer Illangelo to refine his signature sound, with other input from some of the hottest producers in pop music including Metro Boomin and Max Martin, transforming the album that sees The Weeknd in his purest form, crooning about the women in his life and the trappings of a celebrity lifestyle.

One of After Hour’s standout tracks comes from the most unlikely of sources in experimental electronic producer Oneohtrix Point Never also known as OPN. It’s OPN who refines his abstract production style on the album’s closer, Until I Bleed Out, providing the perfect instrumental landscape for the most depressing moment on the album, with Weeknd singing about cutting women out of his life as sampled in the following lyrics

After Hours shows the Weeknd at the top of his game combining the moody, drugged out lyricism of his early mixtapes with the slick, Michael Jackson influenced pop that’s made him a household icon. His dedication to take his time on his latest album shows his absolute mastery of his craft, and while he may never have a hit as big as Can’t Feel My Face, he remains the king of dark and adventurous pop, and long may he reign.