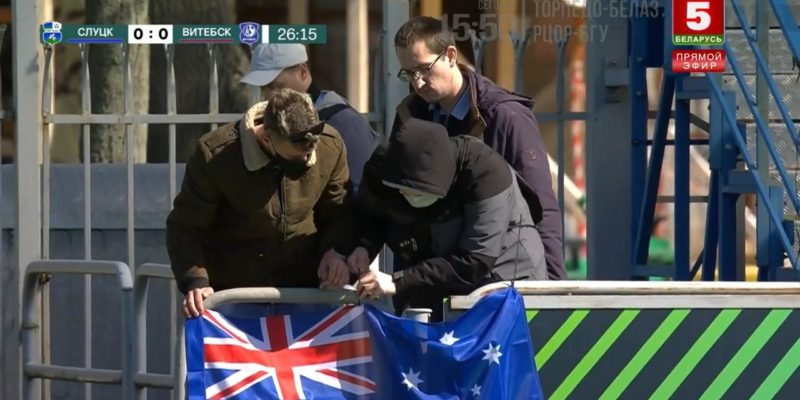 While Australian sporting fans look everywhere including the kitchen pantry to find their sporting fix during the COVID-19 lockdown, it’s a little known football club on the other side of the world thats capturing fans’ attention.

It’s the evening of Easter Saturday in Australia and like most Saturday nights in April, thousands of Australian football fans are settling in to catch their beloved football team by whatever means possible.

However, it isn’t the Saturday evening A-league fixture, English Premier League or German Bundesliga that fans are hoping to see.

As the large majority of the sporting world is in lockdown there’s a little known club in Europe’s old eastern block that rightly or wrongly continues to play amid the coronavirus, they aren’t only satisfying Australia’s appetite for football, but also the world’s.

Located around 100kms south of the Belarusian capital Minsk, the city of Slutsk sits on the Sluch River and is home to the mighty FK Slutsk.

FK Slutsk (pronounced Slootsk) competes in the Belarusian Premier League and despite the humorous name or perhaps because of it, FK Slutsk is gaining a worldwide cult following including a nearly 5,000 strong Australian based Facebook group.

The group FK Slutsk Worldwide was founded by football fans in Adelaide, Australia.

Group admin, Ilario Finis said the initial interest was sparked in a chat group between Adelaide United fans as they went on the hunt to find their football fix during the A-league lockdown.

“We were all starved for football, the first game happened to be FK Slutsk v Slavia [Morzyr], we picked the home team, we then recognised the home team’s name and thought…Yeah, that works in English,” Finis joked.

From there, the Facebook group was born and became embraced by thousands of other (often rival) Australian A-league fans as well as fans in America, Europe and across the world, Finis explained.

“I went to sleep and had something like 255 member notifications the next day,” he said.

Finis goes on to explain the relationship built by the Australian based Facebook group, the club management and local fans including a Belarusian Slutsk fan who bought an Australian flag to hang inside the stadium at last night’s game, as a mark of respect to the Australian group.

But it was their discovery of Slutsk’s financial woes, including the lack of a major sponsor that put a slightly serious spin on the group.

“During all this, we discovered the club was in financial trouble, they didn’t even have a  sponsor.” Finis added.

He explained that while the group started out as a bit of fun, a semi-serious element grew as they began brainstorming how they could help the financially stricken club.

“The fun element is going to be there for awhile but I think once we found out they were in financial trouble and basically the ‘small-time’ underdog…. You know what the Aussie spirit is like… We don’t just pick the team that wins,” he said.

“It’s also because of the interaction with the club, they always get back to us… we’re always in contact.” Finis said on the clubs’ mutual respect for its newfound supporter base.

But for fans its the gestures such as showing pictures of new fans from all over the world on the stadium big screen while bellowing out the cult anthem ‘We love our Slutsk’ which has resonated the most.

“Our aim now is to help the club be financially stable, and when this (Covid19) is over a few of us are planning to go and watch a game in Belarus,” he added.