ABC Darwin has sparked a comical social media exchange by posting an official post bringing up the concept of a travel bubble for NT, WA and SA.

The original idea belongs to Darwin Major Business Group’s Ian Kew, who is requesting for quarantine measures to be alleaved from air travel between the three jurisdictions.

The post broke out into a comical discussion between all the ABC state pages. ABC Australia posted a meme from Harry Potter targeting the three involved parties and to top it off, the discussions that follow are to die for. 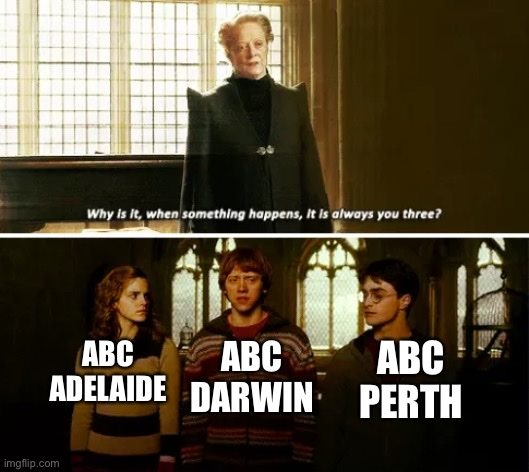 ABC Perth commented asking ABC Australia, “What? I didn’t do anything”, with ABC Darwin also joining in on the fun posting memes and getting in on the gag, even Melbourne is throwing in gifs asking, “Where’s our invite?”.

There are over 8,000 shares and 13.5k reactions to a post that was made as a simple joke, and to top it off, even Canberra got in on the joke saying there’s only one bubble. The Canberra Bubble. Join the Canberra Bubble because of zero cases being in the bubble.

Other people started designing their own bubbles, including a fancy dog bubble that was still in the same area as the original photo, a photo that involved everything but south of Queensland and Tasmania, and another that included Bali.

At this time, Australia currently has 660 infected patients and WA currently doesn’t have any new cases.