Harry Dean Stanton passed away in September of this year at the age of 91. After such a long life and career, it seems fitting that his final movie, ‘Lucky’, is a meditation on ageing and death. 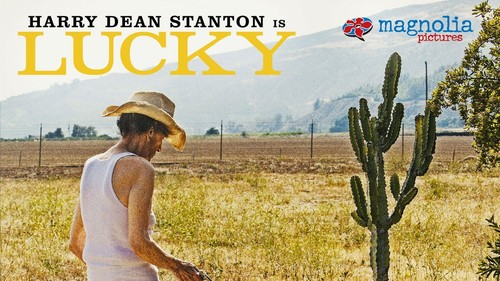 The film follows the titular Lucky, a 90-year-old atheist who lives in a tiny town in the desert in the middle of nowhere. Despite being a pack a day smoker and outliving basically all his friends and family, he remains fiercely independent, sticking to a daily routine of yoga exercises, drinking a cup of milk, visiting the local diner and doing the crossword. However, one day he falls while making his morning cup of coffee, and that makes him think about life and death.

It’s a pretty simple movie- it’s a character study that focuses on Lucky and the way he interacts with the people who live in his town, and the way they impact on him as he nears the end of his life. It’s slow, meandering and thoughtful, but there are some great scenes and thought-provoking monologues to be found. And it’s a touching film, made all the more poignant by the fact that this is Stanton’s final film- when his character speaks about mortality and the spiritual impact of death, you can’t help but feel every word is true.

A Brisbane student just paid someone 20 dollars to kill a cockroach. Timmy T and Kiara want to know what you would pay 20 dollars for?
Merry Christmas, Tis the season to be jolly, enjoy the festivities, drive safely and eat lots of carbs.🎄
Thank you so much @sallyjanemusic for being on the Boom’s Big Breakfast with Prea, Hayden and Kael, we are excited to follow the next chapter of your story!