Well what a week it has been in news.

Again terror tried to reign Europe, this time with a hijacker taking control of an EgyptAir plane which was traveling from Alexandria to Cairo. The hijacker instead made the plane land at Cyprus’ Larnaca Airport where a standoff between him and the police began. Thankfully all 61 passengers and crew who were on board the flight made it out safely and unharmed. The event took an interesting turn when the hijacker’s suicide belt that he said he was wearing, was found to be a fake, and made up of mobile phone covers. The real reason behind his motives has not yet been confirmed.

Unfortunately we stay on the topic of terrorism, and nearly two weeks after the deadly terrorist attacks in Brussels, the sole suspect remaining known as Faycal C, was released from Police custody due to a lack of evidence. Faycal C is believed to be the mystery third bomber at Brussels’ Zaventem Airport, who ran away shortly before the suicide bombs went off due to his bomb not being properly wired. The attacks which killed 35 people and left many other seriously injured has been claimed by the Islamic State militant group. 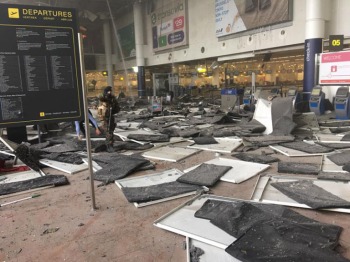 Back on home soil now, and former Australian Prime Minister Tony Abbott has found another way to annoy members of the public. This time Mr Abbott has broken one of the 10 Surfing commandments as he took to the waves on the Sunshine Coast. What did Tony do though…..well he just casually drifted in on someone else’s wave, which is a massive no-no in surfing. The wave was being taken on by 17 year old holiday maker Ivy Thomas. Ms Thomas said despite Mr Abbott coming in on her wave and impeding her path, she wasn’t too upset but Mr Abbott should watch out for that in the future.

Finally this week, global megastar DJ, Avicii, has retired from the industry at the age of 26. Avicii whose real name is Tim Bergling, stated that he was walking away so he could use what time he has left on Earth to persue other interests. In his time DJing, Avicii has amassed more than $75 Million and a handful of #1 singles and albums on the global charts. Fans are not to be too worried however, he has said he is not walking away forever, but this will be more like an extended hiatus.

And that is a wrap on the news for this week. No doubt another big week ahead, so make sure you tune in Monday morning for all the latest headlines from not only Australia but right around the world.